History of the Scout’s Uniform

Is anyone more recognizable than a Scout in uniform? Probably everyone in America, at one time or another, has seen someone in the iconic khaki shirt, neckerchief, and olive shorts or pants.

The first version of the Scout uniform was inspired from the very thing Baden-Powell wore in the British Army. It featured a shirt, shorts, scarf, and wide-brimmed hat. The shirt sleeves were long, but the sleeves were often worn rolled up.

The BSA formed a committee on Badges, Awards, and Equipment and commissioned them to design their original Boy Scout uniform. The committee decided on a khaki campaign hat, choke-collar tunic, knee breeches, and canvas leggings. This lasted until 1917 when the neckerchief replaced the less comfortable, more military-looking tunic.

Shorts made perfect sense when taking into account a Scout’s lifestyle of camping and being outdoors, however, in the conservative 1920’s many Scouts still wore long pants when not in camp to fit in more with the fashion of the day. 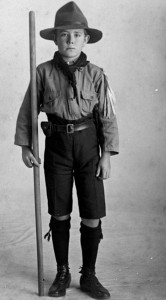 A Scout uniform circa 1910 (via Wikipedia Commons).

During the second World War, Scouts adopted “Overseas caps” to show solidarity with the troops and this addition to the uniform lasted for over 60 years.

During the Sixties, the itchy wool and rough cotton fabrics were changed to lighter, breathable permanent press fabrics to allow for greater comfort and ease of care when camping.

In 1980, the BSA decided it was time for an update and asked famed fashion designer Oscar de la Renta to redesign the uniforms of the Boy Scouts, Cub Scouts, Explorers, and adult leaders. He worked on the project without pay for two years and came up with a Boy Scout uniform that consisted of long or short-sleeved khaki shirts with crimson epaulets. These were paired with olive green shorts or pants with added utility pockets for practical purposes. The neckerchief became an optional part of the uniform. 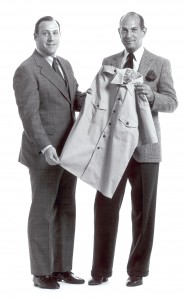 A Scout’s uniform is often decorated with merit, patrol, troop, and other custom patches used to signify achievement, rank, and experience.

The uniform has become much more than articles of clothing. It has come to stand for pride in Country, an individual’s troop, and the values instilled by being part of the Scouting movement.

Boy Scout circa 1970 (via Wikipedia Commons)