Robert Stephenson Smyth Baden-Powell, 1st Baron Baden-Powell was born on February 22nd, 1857. In addition to founding the International Scouting Movement, Powell was a Lieutenant-General with the British Army and later authored several books on military reconnaissance and training before completing Scouting for Boys in 1908. 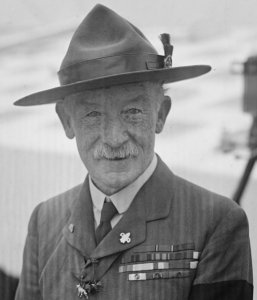 He tested some of his Scouting principles by taking a Boy’s Brigade to Brownsea Island in 1907. Baden-Powell married Olave St. Clair in January 1912. They met on the RMSP Arcadian ocean liner  while Baden-Powell was on his way to New York to kick off a Scouting World Tour. At the time of their marriage, St. Clair was 23 and Baden-Powell was 55. Though born many years apart, they shared the same birthday. This day is now known as Founder’s Day to Scouts.

Baden-Powell served the British Army in campaigns in India and South Africa. It was on one of these military campaigns that he saw a large string of wooden beads around the neck Dinizulu, king of the Zulus. Years later, this encounter would inspire the Wood Badge leadership training within the Scouting movement.

He was a talented artist and liked to draw and paint as hobbies.

Great Britain awarded Baden-Powell the Order of Merit in 1937. He retired from making public appearances for Scouting at the 5th World Scout Jamboree that same year.

Powell died on January  8th 1941. His grave can be found in St. Peter’s Cemetery. His last public words to the Scouts contained the message, “‘Be Prepared’ in this way, to live happy and to die happy — stick to your Scout Promise always — even after you have ceased to be a boy — and God help you to do it.”