The Birth of Cub Scouting®

1930 brought on a significant addition to Scouting with the development of Cub Scouting for younger boys. 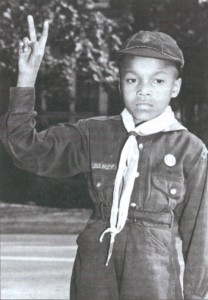 Used by permission. Boy Scouts of America® All Rights Reserved.

In the early years of the BSA, leaders recognized what they called a “younger boy problem,” meaning that boys below the age of 12 were watching their older brothers or relatives enjoy all Scouting had to offer and wanted to join in the fun. The problem was, until Cub Scouting became official, Boy Scout troops were either allowing younger boys to participate in the older boy’s program or throwing their support behind a junior program Baden Powell established in Britain called “Wolf Cubbing.” Powell had even written a handbook for younger boys entitled, The Wolf Cub’s Handbook.

Due to the popularity of Powell’s overseas program with some BSA Councils in America, the National organization decided they needed a program that would be separate from Scouting, but still do a thorough job of preparing boys for becoming Scouts.

After several studies conducted by the National Council and the formation of a few demonstration Cubbing units in 1929, Cubbing was officially born on April 1, 1930 when the BSA allowed Cub “Packs” to register. It is interesting to note that the term “Cub Scouting” didn’t take root until 1945. The Packs were further broken down into “dens” of six to ten boys who were led by a den chief, usually a Boy Scout from a local troop. However, because parental supervision was even more important with boys of this age, assigning one of the boy’s mothers as the “den mother” became regular practice by 1932.  The BSA officially recognized Den Mothers in 1936 and published The Den Mother’s Handbook one year later. 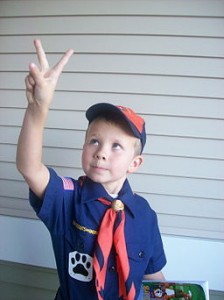 By the 1940’s there were already 286,402 boys enrolled in Cubbing and the BSA could not deny it had been an excellent addition. The organizational structure of Cubbing was this: a boy entered as a

Bobcat at the age of nine and earned advancements to Wolf, Bear, and finally Lion ranks. In 1941,

Webelos or “We’ll Be Loyal Scouts” were added. These were eleven-and-a-half year old boys who had already earned a Lion badge, along with certain requirements for becoming a Tenderfoot in the Scouts.

The uniform a Cub Scout wore showed their distinction of being a separate group from the older Boy Scouts. A Cub wore a blue cotton uniform instead of the Scout’s olive green pants and tan shirt. Cubs always wore shorts, while Scouts wore pants with shorts being optional.

The popularity of Cub Scouting and the mentoring that takes place within its ranks ensures that a fresh crop of boys will be eager to accept the honor and responsibility of being a Boy Scout every year.

Are you involved in Cub Scouting? If so, give a shout out to your Pack in the comments! Also, follow @ClassBPacks on twitter for Cub Scout news and weekly t-shirt giveaways :)