William Boyce, A Good Turn, and the Birth of the BSA®

To honor our loyal Scouting supporters, customers and volunteers, we’d like to use the month of February to focus this blog on events related to Scouting’s history. The first post having to do with the birthday of the BSA.

The BSA was founded on February 8th, 1910, but its origins can be traced back a little earlier, to a fateful day in London. Scouts and historians will debate how much, if any, fog there was that day, or what was or wasn’t discussed between William Boyce and the Boy Scout he encountered on the streets of London in 1909, but this is what is known.

William Boyce was traveling through London on his way to British East Africa when he lost his way and a Scout came to his aid. When Boyce offered to tip the boy, he refused explaining that he was just performing his daily good turn. This simple act has been immortalized as the legend of the Unknown Scout. 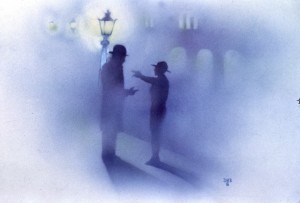 Used by permission. Boy Scouts of America® All Rights Reserved.

This exchange between the Scout and Boyce must have left a strong impression on the businessman, since Boyce went on to found the BSA a few months later.

It has been recorded by numerous sources that the Scout did tell Boyce the location of the Scout headquarters where Boyce acquired the manual and literature he used as a guide to establish Scouting in America.

This story is inspiring for many reasons.

First, it demonstrates how a simple act of kindness can have a lasting effect on a person. I’m sure William Boyce never forgot the Scout who so willingly and self-lessly assisted him that day.

Second, it reinforces that inspiration can strike at the least expected times, if a person remains open-minded and non-judgemental. Boyce was not at a business conference or dining with some wealthy dignitary when he had the meeting that would forever alter the course of his life. He was lost, standing in the street, unsure of where to go next, until he spoke to a Scout.

Finally, the story of how Boyce founded the BSA is another example of how one man can change the world by executing an idea and seeing a plan through. Boyce educated himself on Baden Powell‘s Scouting movement, made a conscience decision to start the BSA, and the youth organization he started has gone on for over 100 years and over 110 million participants.

Are you currently involved in Scouting? If so, what good turn that you performed had positive effects beyond what you expected?