For anyone who has ever wished that they could read the mail of the men who founded the BSA, The Scouting Party will be of great interest. This well-researched book uses the backdrop of America during the Progressive Movement in the early 1900’s to focus on the often strained relationships of men like Ernest Thompson Seton, Daniel Carter Beard, James E. West, and Lord Baden Powell. 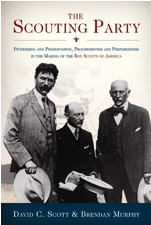 Through personal accounts of hotel meetings and the actual text of letters sent back and forth between the parties, readers get a glimpse of the egos, attitudes, and principles of these distinguished leaders.

The main conflicts are between Seton and West with Beard often being called into the argument to take sides against Seton or to mediate. Here are some quotes from an argument that arose over the look of patrol emblems.

“I know something about heraldry and I know a great deal about patrol emblems,” Seton tells the editorial board including West.

“I think Mr. Seton is all wrong in this matter,” West responds.

“I think he is making a mountain out of a molehill,” Beard says in reaction to Seton’s advice on the emblem designs.

Arguments like this one over details, and others regarding who should get credit for founding what aspects of the BSA, escalate to the point where Seton formally resigns from the Boy Scouts of America in 1915. Throughout the book, events like this are always put into the larger context of President Roosevelt’s America. Roosevelt even becomes a key player at times, entreating the BSA (a peaceful organization) to stand with him as America rallies to join the war effort.

The book is careful to remain objective, by presenting facts and letting the reader form their own opinions.

Overall, The Scouting Party is an informative and descriptive book on the rise of the Boy Scouts of America in the early twentieth century that Scouting historians will love!

Want to check out the other books in our Scouting Summer Reading Series?

Book 1: The Other Side of the Road