Summer Reading Series, Book 3, To Do My Best

If you’re looking for a book on the BSA’s history that really give some insight on why the Scouting movement is organized the way it is, check out To Do My Best James E. West and the History of the Boy Scouts of America. 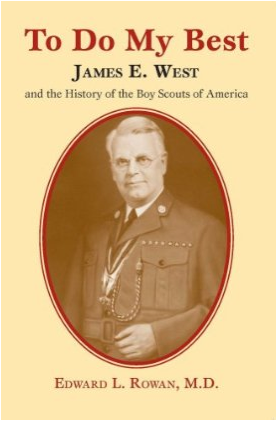 BSA’s founder was a complicated and highly principled leader. The author of this book, Dr. Rowan, uses an easy-to-follow chronological structure to highlight key moments in the BSA’s history that grew the organization. He also reveals the character and personality of Mr. West, the first “Chief Scout Executive.”

The book raises many intriguing questions and offers several interesting stories for example:

Early in his legal career, West had his car stolen. West had left his two-seater parked while he visited a settlement house. He returned to find it gone. The police picked up the boy who stole it and West was asked to testify in court. When he learned that the boy had no lawyer, West volunteered to defend him.

The story goes on to tell how West saved the boy from prison by getting him off on a technicality. This action led to West helping to organize a Citizens Committee for Juvenile Court and saw the bill passed into law by Congress on March 12, 1906. West was of a firm belief that children should not be tried as adults and that there hearings should take place in a different setting by people who had experience working with young people.

Stories such as this one make this book a fascinating read.

At times throughout the book, James E. West  seems like a study in contradictions. He was a physically ill man from birth who never camped, yet he became the leader of the BSA. He was accused of being chauvinist when he went after the Girl Scouts for name infringement, but at the same time, had sent both of his daughters to respected colleges and always encouraged their career advancements.

West established The President of the United States as the honorary President of the BSA and this wise move did a lot of good for promoting the organization. The book highlights each President’s actions during this appointment for the years that West was in charge of the BSA.

Anybody in a leadership position in Scouting should add To Do My Best James E. West and the History of the Boy Scouts of America to their reading list.

Subscribe to the RSS feed of this blog to catch our next book review on The Scouting Party by David C. Scott and Brendan Murphy!

Check out the other books in our Scouting Summer Reading Series!

Book 1: The Other Side of the Road